Out Takes: The Best of Love in a Small Town 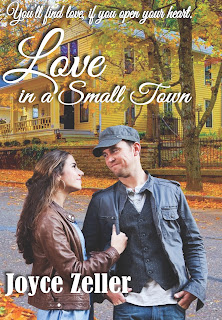 The first draft of my latest book, Love in a Small Town, had to lose about 20,000 words to bring it in under 80,000. Two of the out takes were worth saving, Logan’s Haircut and Sarah’s tattoo. Here is the story of the haircut.

Logan is the class resident geek and genius who hangs with three friends, Dakota, Anthony, and Karen, also considered class misfits. He sees Sarah’s discomfort the first day, responds to her misery, bit is too shy to connect until the day she catches him following her home from school. Sarah responds to him and they become friends. Sarah’s nurturing soul decides he needs a makeover to improve his acceptance. One day, on the way home from school, she talks him into a haircut. We’re in Logan’s point of view.

“You want to do this today?”
“Absolutely. Right now, before you have a chance to change your mind.” Sarah grabbed his hand and pulled him along the sidewalk at a trot, in a hurry, he guessed to get a haircut before he could figure a way out, sure men didn’t get haircuts where women did.
With no chance to do more than voice a futile plea for time, he was there—at “Hair by Delon.” His father would go ballistic at the thought of him getting a haircut at a place like this, and probably by a gay. In a community as diverse as Eureka Springs, you learned to be comfortable with gays, but, on the two occasions per year he was ordered to get his hair cut, his Dad sent him to the local barbershop, also a fishing and hunting guide service. His hair was pretty long, so maybe his Dad wouldn’t ask questions.
In an agony of embarrassment, he allowed himself to be dragged into the shop and hauled before the only person there, probably Delon. The guy was good-looking enough to be a model, and he smiled at Sarah affectionately, like she was his favorite person.
“Delon,” Sarah said, “we need your help. My friend, Logan, must have something done with his hair. I promised him you’re the best, and wouldn’t do anything radical, just make him look like a hunk.”
Logan felt his face flush. Delon gave him a wink that was pleased and sympathetic at the same time. “I can relate. Our Miss Sarah is hard to resist when she’s on a mission.” He whipped a cape from a wall hook and ordered, “Come over here and sit in this chair.”
The chair was next to a sink. Logan looked at it, warily. Was this guy going to wash his hair? He would have bolted for the door, but already he was in the chair, lying head back, in front of the sink. Warm water drenched his scalp. Soapsuds clogged his ears.
“Sarah.” It came out a strangled cry.
Sarah held his hand, patting it soothingly, like he was some scared little kid. He understood this was her turf, and she was in charge. “Relax, Logan. Hair has to be wet to be cut properly.”
“Sweetie,” Delon nodded to Sarah, “go put the Closed sign on the door, and lock it.” He winked at Logan, giving him an understanding smile.
Logan sighed. At least nobody he knew was going to come walking in the door and see him. This guy was all right.
Done. With his head wrapped in a towel, he was led to a swivel chair, in front of a mirror, and told to sit, while Sarah and Delon discussed his hair like he wasn’t even there.
Sarah circled him intently, like a cat considering possible prey. “Maybe a Matthew McConahey, but longer.”
“He has such lovely hair, and thick. Once it’s thinned, we’ll find too much curl for the McConahey look. I can do better.” He seized his scissors and advanced.
Logan’s eyes widened in alarm. Delon just laughed.
“Trust me. You’re going to walk out of here looking gorgeous.” Rapidly he sectioned the hair and fastened it with clips. Logan cringed at his image. Alarming amounts of hair fell in clumps all around him. Delon turned the chair away from the mirror.
“You can’t see what I’m doing until it’s over. This is going to be marvelous.” He purred with anticipation, scissors snapping like teeth.
It didn’t take long. Clippers were used to shave the back of his neck, after which a large, soft brush dusted all the loose hair away, and the cape was removed. A short session with a hair dryer, and he was finished.
Delon spun the chair with a flourish. “There, now. How’s that?”
He looked so different. His hair barely covered his ears, curling softly around his face. It looked a lot thicker on top and part of it fell onto his forehead. Actually, it looked pretty neat. Yeah, he looked good.
“It’s cool,” was all he could manage.
“Logan,” Sarah’s voice was hushed in awe, “you’re absolutely beautiful. I had no idea. You have incredible eyes.”
Delon hummed. “Wouldn’t you just kill for eyelashes that long? Absolutely to die for.” He sighed, resigned. “I’m a genius, but I manage to live with it.”

Love Out of Time

Can a lost love span a century?

Sara Burkhart rented a beach house on the jersey shore to recover from the divorce that shattered her life. She didn't expect to fall in love with the ghost of a Whaling Ship captain from 1860 who was the true love she never found. Read the full story on Amazon. http://www.amazon.com/dp/B00UPMAS9G

She is a poor department store clerk. He is a millionaire TV star. They meet Christmas Eve while he is searching for his dog, Annabel. Many forces conspire to keep them apart, but a friendly old gentleman shows up to help.

"Maddie's Choice," my romance about cattle, kids, an ex-merc, a feisty writer from New York--both of whom need a lot of loving--and a chocoholic bull, is available from Amazon.com in both paperback and e-book. Thank you Agent Jeanie Loiacono and Loiacono Literary

Daniel looks human, but biologically he is a plant, with imbedded Artificial Intelligence, and the ability to change into any other living thing. He was left here as a seed by a spacecraft. He hatches, grows into a human, and must learn to live as human. Some friends teach him to be a professional gambler and he settles in a town in Nevada where he must cope with a female assassin sent to kill him, and a mobster out to get him, a neighborhood drug lord, and two detectives searching for him because they think he might have murdered a mob boss.
This book is a lot of fun and asks some hard questions about human behavior.

Add your e-mail here and be notified when a new blog appears.

For Writers and ReadersFollow by Email

There are really two of me. The one is an author of the novels in the left column; the other is a political animal, an elected official on the city council of Eureka Springs, AR and interested in world happenings. I use this blog to express those ideas and concerns, everything from writing to anything that interests me.
Visit my website: http://joycezellercom.weebly.com to learn
more about me and my books.
Notice the button at the top of this column. Add your e-mail and you will be notified of new blogs. You can follow news and stories about the characters in all my books, including those to be published.